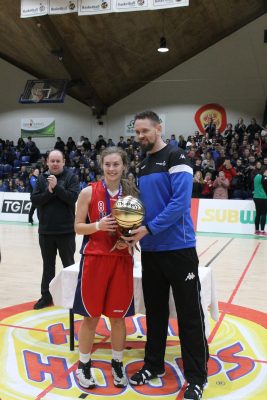 Congratulations to our senior basketball team and their coaches who are All Ireland Champions after beating Colaiste Pobal Setanta 65-76  in the National Basketball Arena Dublin. 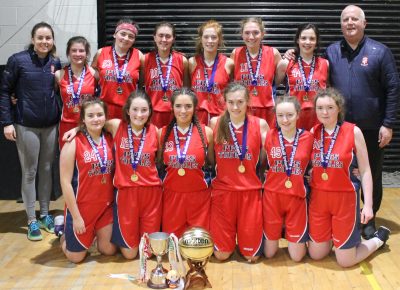 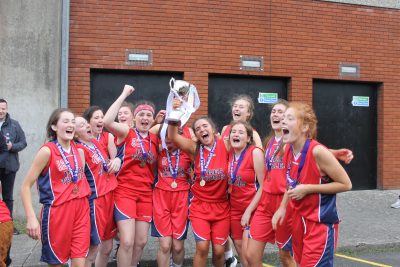 “Global Ireland” is an ambitious All-of-Government programme to double Irelands impact in the world by 2025. As part of this initiative the “Global Schools” programme has been launched as a means of engaging second-level students in three areas of the programme, namely how we trade, the bilateral and multilateral partnerships we build and our wider contribution to the world. On Thursday last Caoimhe Fleming Farrell third secretary in the Department of Foreign Affairs and Trade, accompanied by Mark Hannify the Consul General in Edinburgh and Lt. Col. Martin Larkin addressed the students of our school in what was the first talk of a roll out plan for second level schools. A sincere thanks to all involved.

Best of luck to all our TY students as they enter this years Junk Kouture competition. The competition encourages students to create show stopping  outfits made entirely from recycled materials. The girls have been working hard since September to get their outfits ready for the January deadline. We wish them all the best and look forward to hearing the results. A big thank you to their teachers Mrs O’Sullivan and Ms Bryan for all their hard work. 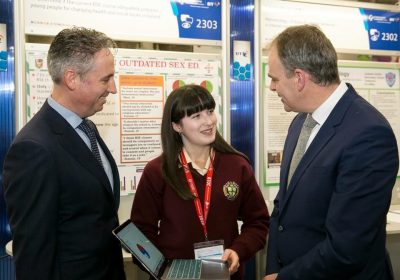 This year saw an all-time record number of entries in the 55 year history of the BT Young Scientist and Technology Exhibition. It is a huge achievement to qualify and 2 projects from Presentation Secondary School students were short-listed.

The qualifying projects both in the Social & Behavioural Sciences category included:

Congratulations to 6th Year student Roisin O’Connor who won two awards at the exhibition, the Senior Individual award in the Social & Behavioural category and also the Rev. Tom Burke Bursary for best communicator.

Well done to all the students involved.

Congratulations to sixth year student Roisin O’Connor, one of just thirty successful students nationwide selected to take part in the 2019 BT Young Scientist Business Bootcamp from 4th to 7th March in Innovations UCD. During the Business Bootcamp, Roisin will experience first-hand the world of technology, commercialisation and entrepreneurship. The four day programme will involve working in teams to inspire creativity and innovative thinking, to encourage research and develop critical thinking skills. The teams will be set business challenges and will be addressed by guest speakers throughout the camp, culminating in team presentations to a panel of expert judges. 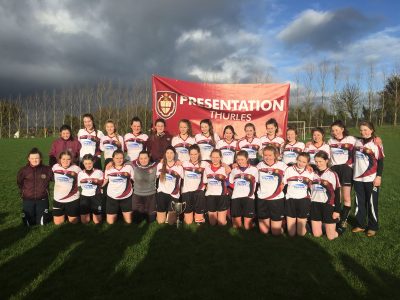 Presentation Thurles captured the Munster Senior A soccer title for the second year in a row with a stunning victory over 2017 All Ireland champions Coláiste na Trocaire Rathkeale. The Pres girls settled into the contest early and pushed the Limerick girls back with a series of attacks. This early pressure was rewarded in the seventeenth minute when Lauren McCormack emphatically finished an Emma O’Sullivan cross to the net. However, Rathkeale were awarded a penalty which Rachel Sweeney spectacularly saved to a huge ovation from the Thurles supporters. Just as half time approached Pres Thurles struck a killer blow as an Aoibheann Clancy free kick was parried by the Limerick keeper into the path of the onrushing Missy Condon who calmly dispatched the loose ball to double the Pres lead. The second half saw Rathkeale apply a lot of pressure, but the Pres defence remained strong. Saoirse Teer put in a flawless performance from the right back. Ellen Moore battled tirelessly and Anna Gavin won the midfield battle. With the minutes ticking away Pres Thurles added a third goal after another fantastic run from Lauren McCormack who fed Ellie Maher, the latter making no mistake with a composed finish. Pres captain Katie Ryan received the cup for a second year running and thanked her team mates, coaches and mentors. The All Ireland semi-final will be played on the 31st of January against the Leinster champions. 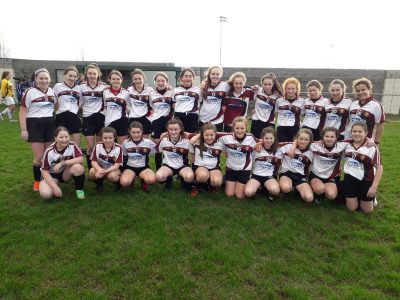 Presentation Thurles qualified for the 2019 Munster Minor A final after an accomplished performance against a hotly fancied Crescent Comprehensive Limerick. Emma O’Sullivan opened the scoring with a brilliant finish from an acute angle, after great work from Missy Condon. Cally Dooley was a constant thorn in the side of the Limerick defence. Presentation doubled their lead when Chloe Shorley headed home an O Sullivan cross. Crescent responded when they pulled a goal back from a corner.  Emma O Sullivan immediately restored the two goal cushion with a solo effort.  The game was over as a contest when player of the match, Missy Condon, fired home a penalty after great work from Caoimhe Mcgrath. On the day Molly O’Dwyer, Ellen Maher, and Amy Callanan were all very much to the fore and the Presentation girls can look forward to a Munster final in February. The final score was Presentation Thurles 4, Crescent Comprehensive 1.

Some students from Transition Year were busy this week taking part in various coaching programmes. Rowing Ireland and Volleyball Ireland conducted training courses designed to equip the students with coaching skills in these disciplines. Students in the Presentation Primary school are looking forward to coaching in Spikeball from the Transition Year students, while some first year groups have already started classes on the Rowing machines.

The Senior hockey players travelled to Bandon on the 15th January to play Bandon Grammar school in the Senior Cup. The match started with high intensity and both goalkeepers were called into action in the first half. Presentation enjoyed a lot of possession but could not break the deadlock by half time.  The second half was exciting, and Pres applied much pressure but were denied by the post. With eight minutes to go and against the run of play, Bandon broke through our defence and scored the winning goal.

The Senior and the Minor hockey teams travelled to Villiers in Limerick on 22nd January. The Senior team drew 0-0 against a very good Villiers side. The Minors played a great game of hockey and beat Villiers 1-0 with a fantastic goal from Vicky Owens. The minors are through to the next round of the cup in the coming weeks. 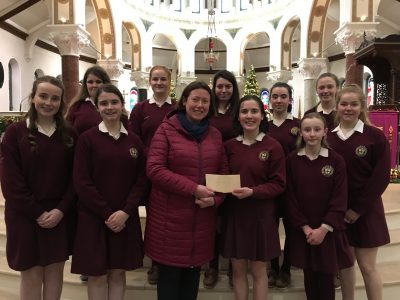 Well done to everyone involved in our fantastic carol service in the Cathedral this Christmas. A big thank you to Fr Vincent and to our Music and Religion department for organising the service. Well done to our Student Council who held a Christmas Jumper Day and raised €1,000.

On Wednesday the 8th January, Mrs. Catherine McCormack co-ordinator for the CEIST Faith Leadership and Governance Team came to our school to work with the members of our Student Council. Mrs. McCormack spent two hours with the girls, discussing their duties, roles and responsibilities adhering to the strong CEIST ethos in the school. Mrs. McCormack acknowledged the work already done by the Student Council and encouraged them to move forward with ideas and initiatives for the improvement of school life for all students. The girls benefited greatly from this training and we are very grateful to Mrs. McCormack for giving her time to work with the girls. 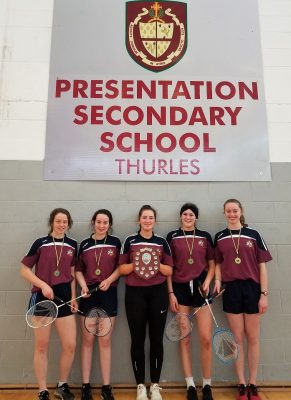 Congratulations to Presentation Thurles, whose under 19 Badminton team won the Tipperary Badminton Championship, defeating Borrisokane decisively in the final. The team consisted of Emily Phelan, Sarah Doheny, Mary Ellen Phelan, Ciara Treacy and Ciara Dwan. This is the second consecutive year the Pres girls have won the top badminton award in Tipperary.  Presentation Thurles will now represent Tipperary in the Munster Championship in UL. We wish the girls the very best.

On Sunday last, 27th January, two of our Equestrian teams competed in the Interschools Showjumping Competition held at Ryans Equestrian Centre, Thurles. One novice team and one open team competed in the competition. We are delighted to say that our open team of Harriett Penfold, Aoibheann Duggan, Aine Duggan and Ciara O’Sullivan finished in second place. The team had three clear rounds and then Harriett and Aoibheann went forward to take part in the jump off. They narrowly missed out on first place by three seconds. Well done to the open team on a super performance.

The novice team consisted of three first year students Katie Healy, Sophie Maher and Rachel Ralph; and Debbie Mangold a transition year student from Switzerland. Debbie was delighted to take part and win her first Rosette in Ireland. Well done to the Novice team on a fantastic display and great teamwork.

Ten fifth year students from the Presentation Secondary School Thurles attended a model United Nations Conference organised by Davis College. The event took place over four days in City Hall, Cork with over three hundred students from Ireland and many other countries including Spain and Portugal taking part. Issues discussed included the rehabilitation of drug users and the regulation of Drone usage. Discussions were held focusing on ethical dilemmas arising out of the treatment of the Rohingya People and the conflict in the Sahel. Well done to all students who participated.