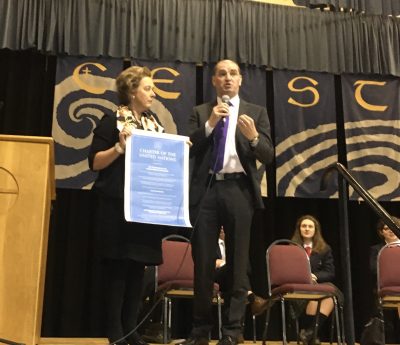 On Thursday the 10th of January Coláiste Bríde welcomed three very distinguished guests, the Irish Ambassador to Mexico, Barbara Jones, the Minister of State at the Department of Defence and local TD, Paul Kehoe, and a Captain of the Defence Forces, Steve Byrne.  Barbara Jones is both a native of Enniscorthy and a past pupil of Coláiste Bríde and it was at her request that Coláiste Bríde had been selected to be amongst the first schools nationally to launch the Global Schools programme.

A central theme of the programme is Ireland’s role in a changing world, and the importance of ensuring that Ireland continues to have a strong international presence across multilateral organisations. Ireland has been committed to multilateralism since the foundation of the State, and we have been active and committed members of both the UN and the EU since our admission to those bodies.  The ‘Global Schools’ programme is conceived of as a means of engaging second-level students across the country in the core elements of Ireland’s global presence.

At the whole school ceremony each of the guests were welcomed to the school by the principal, Kiera O’Sullivan, who spoke about how the Ambassador, as a past pupil, is an inspiration to our current pupils.  It was also stated that the Ambassador, despite working all over the world, continues to keep in contact and is a great supporter of the school. 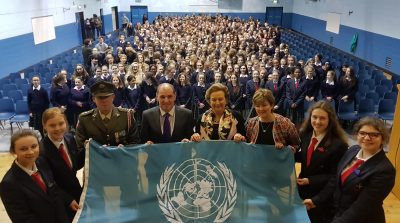 The Ambassador spoke to the students about her career as a diplomat representing Ireland abroad and her more recent postings as Ireland’s Consul General in New York from 2014 to 2017 and her current role as the Irish Ambassador to Mexico.   She spoke about how UN membership is at the heart of Irish foreign policy and of Ireland’s important contribution to keeping peace around the world.  She also spoke fondly of her time as a student in the school and her continuing pride in the wonderful school it continues to be.

Minister Kehoe spoke about his recent trip to Mali and of the brilliant work and dedication of the Irish Defence Forces both at home and in their peacekeeping duties abroad.