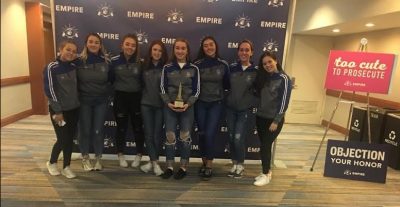 A mammoth fundraising campaign undertaken by parents over the Summer months had enabled the Eureka Mock Trial team to compete in the illustrious United States District Court for the Southern District of New York courthouse amongst teams from all over the U.S., Canada, the U.K, China, South Korea and Australia where they battled over evidence, objections and expert testimony in courtrooms that had heard the injury and loss claims of the Titanic and Lusitania disasters and had recently seen Trump attorney Michael Cohen sentenced.

The girls of Eureka drew a nail-biting opening round with Faith Lutheran High School of Nevada before soundly defeating both Creekview H.S. of Texas and Holy Rosary of Mountbellew, Galway. Their run of success saw them drawn against 2016 World Champions Carmel High School of California, a knockout encounter of wit and will which they narrowly lost. Unfortunately, this result which meant they lost out on the best international school award by a margin of two points to Stoooges H.S. of Hangzhou, China. However, they did not leave lower Manhattan empty handed, as Crea Shine was awarded a trophy in the leading attorney category, the only non-U.S. student to pick up an individual award. Crea’s success also means she has qualified to compete at the Gladiator Mock Trial Championship in Newport Beach, California in July 2020. The Eureka team  were coached by solicitors Ms. Elaine Traynor and Ms. Edel Traynor and teacher Mr. Ronan Fahy.