Getting the low-down from Lourdes 2018 … 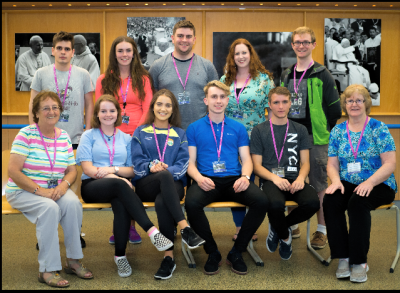 Saturday, the 1st of September marked a considerable change in my life… I did not graduate nor did I pass my driving test. However, I went to the south of France to a small town, a town by the name of Lourdes. I was one of sixty others who assisted the annual Kerry Diocesan Pilgrimage as volunteers. Retrospectively, it was one of the most, if not the most difficult and unique decisions of my life.

I play football, and along with being captain of my local Austin Stacks minor team, I have a great passion and love for the game. Three weeks prior to take off I was notified that our up-coming county championship semi-final bash was to be played during our time in Lourdes. This was the first time in twenty years that an Austin Stacks minor team had achieved such a feat.I boarded that plane with a sorry heart and a troubled mind, but looking back on it, it was one of the greatest decisions of my life.

The outward flight was relatively quiet. Very few of the volunteers from the other participating schools knew each another. Coupled by the fact that we had been traveling since 4 o’clock that morning we had reason to be mute. 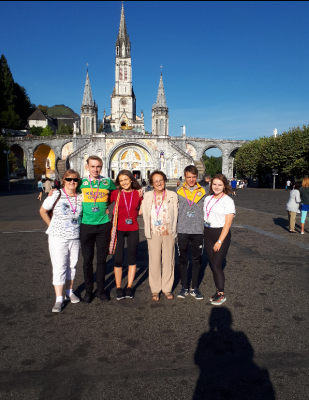 This part of the journey is significant. The events that followed on from the second we arrived in Lourdes will forever resonate with me. The atmosphere in Lourdes is special, it’s indescribable. Here, two months on I am still struggling to verbalise my emotions. Ten minutes in Lourdes and I felt as though I had known each and every single one of the other volunteers for a lifetime. That’s the beauty of Lourdes, everybody is equal.The feeble pilgrims that we would tend to would not arrive until the following day. Therefore, we were given time to become familiar with our surroundings and more importantly with our duties for the week ahead.

Next day, the pilgrims arrived. I’m not sure whether it was ignorance or a lack of understanding on my behalf but the pilgrims or invalids (as they are also referred to) were not at all like what I had imagined. Never in my life had I seen such a large volume of wheelchairs in such a small area. They were a lot more challenged that I had imagined, but that did not matter! They were on their holidays and they were about to live it up! We spent time getting to know one another.  For the majority of the pilgrims this had been just one more of numerous trips to Lourdes. To be truthful, nothing made them happier than reminiscing on past adventures from this place.

6 o ‘clock usually brought a start to daily activities in Lourdes. Daily chores primarily consisted of cleaning the pilgrims’ bedrooms, changing bed linen, assisting them with eating etc. Through-out the rest of the day we would accompany the pilgrims to various religious ceremonies. During our spare time, we would take them to the shops or take them for a coffee. I think the most meaningful part about the time that we spent with the pilgrims each day, was spent through conversation. It’s true for Patch Addams when he said; ‘you treat a disease, you win, you lose. You treat a person, I guarantee you, you’ll win no matter what the outcome’. Each day, simply by talking with the pilgrims, notable improvements were evident in their behaviours. They became more confident, open and trusting of you which was a beautiful thing. 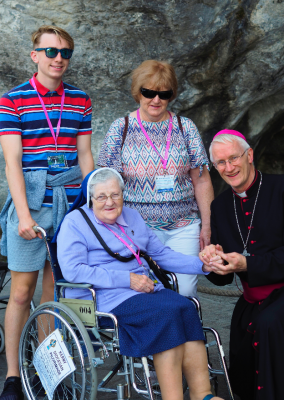 The highlight of the trip was definitely the party organised for both the pilgrims and volunteers on the second to last day. We all congregated in a large meeting room in the hospital, where the pilgrims had been staying. A showcase of Irish music, dance and pop-culture along with buns, pastries and of course Francis Brennen’s award winning ‘barnbrack’ complimented the evening. We sang we danced, and we jigged till our hearts content. I learned something novel that evening.It doesn’t matter what you look like on the outside, it’s what’s inside you that counts. It was humbling to witness the pilgrims smiling and having such fun.  A lot of the time people seem to dwell too much on the past or fantasise too much about the future but, realistically the only thing we can change is the present. Lourdes taught me that, Lourdes taught me to live in the present…

The most striking facet about Lourdes is its attitude towards faith. My outlook on religion has considerably changed since returning home. Having to attend six masses daily was indeed repetitive. Yet, that being said, Lourdes highlighted the importance of faith to me. What struck me most was looking at the pilgrims. These men and women have so little, but because they have faith and because they see that the grass is green when they rise every morning, they have it all. That really was something to behold. As Salman Rushdie once said; ‘The only people who see the whole picture, are the ones who step outside the frame’.

Five unforgettable, action packed days have taught me an immeasurable amount. Volunteering in Lourdes made me realise three things: firstly that health is a gift that isn’t always guaranteed.  Secondly humans are interdependent on each other and finally sleeping less than 6 hours daily isn’t actually too bad!

My experience in Lourdes was incredible, the people I met even more so. The memories I have will last a lifetime. To anyone thinking about embarking on such an adventure, DO IT! You might be thinking to yourself ‘when is the right time for me?’ but being honest there is never a right or a wrong time to do something magical. Don’t wait for opportunity, create it for yourself.