Two second year students have entered a project in this year’s ECO-UNESCO Young Environmentalists competition. They are Alice Davoren and Emily Cullinan. They had entered a project in the BT Young Scientist and Technology exhibition in January. In that project, they discovered that the use of greywater to water plants had a negative effect on the earthworm population in the soil. As a result of their findings they wanted to highlight this environmental issue to the wider public.

A young environmentalist project needs to have an action element to it and they are trying to educate the public about this environmental project. One way they are doing this is through their website: www.mindtheearthworms.com. If they get through the first part of the screening process they will then be asked to pitch their project to a panel of judges at an ECO den. We wish them the best in their project. 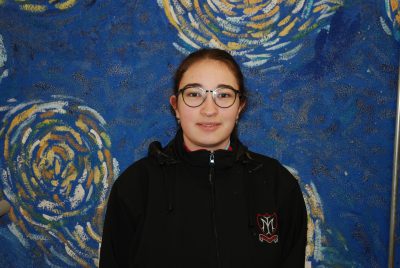 Joanna Koziol who made it to the finals AILO

The All Ireland Linguistics Olympiad (AILO) is a contest in which secondary school students develop their own strategies for solving problems in fascinating languages from around the globe.

Students must use their ingenuity to solve Puzzles such as deciphering Egyptian hieroglyphics, decoding numerical spy codes, and interpreting ancient Mayan poetry.

Joanna Koziol and Cindy O’Leary took part in the AILO Preliminary Round at Mary Immaculate Secondary School Lisdoonvarna. This year saw 1,036 students take part, from 106 different schools, from 27 of the 32 counties. The top 100 students are invited to attend the National Final to be held at Dublin City University on Wednesday 11th March 2020.  Joanna placed 28th qualifying for the National Finals and Cindy placed 113th just outside the top 100. Congratulations to both students on their exceptional achievement.  The facilitating teacher for AILO in Mary Immaculate is Maggie Garrihy.

A variety of crosses are made including the local variation called the Clare cross. The students usually bring their crosses home or in many cases gift them to neighbours and friends. Our thanks to Mr. Slattery for continuing this great tradition in the school. 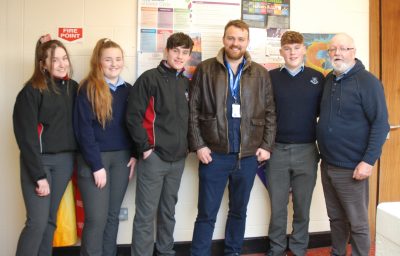 On February 26th Sean O’Gorman, a past pupil of the school, visited Mary Immaculate Secondary School to speak to the TY pupils on careers in the digital sector. Sean works for IBM in Galway. He was delighted to visit his old school and renew acquaintances with some of the teachers that taught him. The TY students were very interested in what he had to say.

TY Show – All Shook Up

This year’s TY show is “All Shook up” which was held in the Pavilion theatre in Lisdoonvarna the week before midterm.   Inspired by Shakespeare’s Twelfth Night, All Shook Up follows a small Midwestern town that is thrown into a frenzy with the arrival of Chad, a good-looking, motorcycle-riding roustabout, who rides from town to town with a guitar on his back, blue suede shoes on his feet, and a song in his heart.

Repressed by their conservative mayor, the town begins to come alive once more under Chad’s influence. Lovers meet, woo, pursue, and more, all in one zany night that will change the town forever.

All Shook Up is a rocking, heart-warming tale about following dreams, opening up to love, and the power of music.

Well done to the Transition years and their Production team, Ms Dunne, Finola Costello and Mr Mulqueeney. The shows, that played out to full houses, were the culmination of months of persistent hard work. It is an important opportunity to bond as a year together, and realise that everyone needs to feel like they belong to the year group and everyone is an integral part of the bigger TY picture.