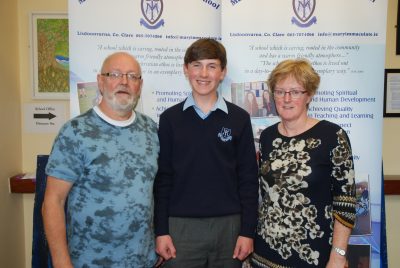 Congratulations to Dylan Egan and his teachers Ms. Burke and Mr. Sims for his selection as a high achiever by the State Examinations Commission (SEC) for his achievements in mathematics and science in Junior Certificate exams in 2018.

Dylan was invited to participate in the National Olympiad competition, which was held in Dublin City University on 3rd November 2018.

Out of the 290 chosen to compete in the competition, six students were selected to represent Ireland in the International Junior Science Olympiad in 2019. We congratulate Dylan for his hard work and dedication to achieve such a high standard nationally. 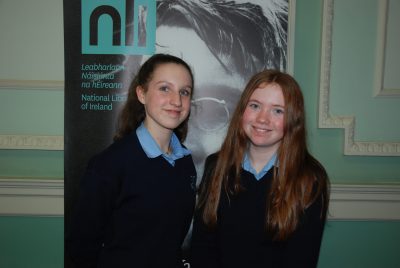 Two students from Mary Immaculate Secondary School saw off competition from 1,700 entrants to reach the semi-final stage of the annual Poetry Aloud competition, organised by the National Library of Ireland (NLI) and Poetry Ireland, in partnership with UCC. The semi-finals took place over three days, from Wednesday, 21st November to Friday, 23rd November, at the National Library of Ireland, Kildare Street, Dublin 2.

Poetry Aloud is an annual poetry speaking competition for post-primary school students across the island of Ireland. The late Seamus Heaney was a significant supporter of the competion.  In 2009, he was presented with the David Cohen Prize for Literature by the British Library.  In addition to the main award, the winner of this prize each year nominates the recipient of a subsidiary prize. In nominating Poetry Aloud for the award, Seamus Heaney cited the extraordinary way in which the competition seeks to celebrate the joy of speaking and listening to poetry as well as the fact that there is a strong North-South dimension to the competition.

The Poetry Aloud competition has three categories: junior, intermediate and senior. Ailbhe Haran (2nd Year) and Emily Cullinan (1st Year) competed alongside 125 participants from 82 schools nationwide in the semi-final, but ultimately did not progress to the final stage of the competition.

Speaking at the semi-final, Brid O’Sullivan of the NLI’s Learning and Outreach Department, said: “Poetry Aloud aims to celebrate the art of poetry speaking and nurture the talented second-level students who practice it. This year, the prescribed poems and anthologies draw on a wide range of emotions and moments in Irish life and they have been truly brought to life by the participants. We are delighted to have welcomed students from Mary immaculate to the NLI to participate in the semi-final and would like to extend our congratulations to all for making it this far.”

The Poetry Aloud 2018 final took place on Friday, 7th December at the National Library of Ireland.

It is that time of year again. The young scientists from Mary Immaculate Secondary School are working away on their research projects. This year there are five entries from the school that were selected to take party in the BT Young Scientist and Technology exhibition..

The entries are Leah McNamara & Jess O’Donohue with a project on “Snail communities in three habitat types in the Burren”, Dylan Egan with a project entitled “LifeSaver – A New Automatic Lifejacket Inflation System”. Sarah McNamara is doing a project entitled “A tale of two soils – a comparative study of upland and lowland soils in the Burren”. Róisín McNamara is involving “An examination of ash die back in the ash trees in an area of the Burren” while Maeve McMahon is researching how a trainable Weka could be used in seashore research. Her project title is an “Evaluation of the use of software as a tool to count populations of different shellfish on seashores”. They will be attending the competition in the RDS in Dublin from the 9th to the 12th January 2019.

In May of this year 3 students from Mary immaculate Secondary School were announced as one of six schools that are finalists in this years Certified Irish Angus Beef School Competition. The three students are Amy Woods, Seamus MacNamara and Katie Thomas. Each of the finalists teams are given five Irish Angus calves to rear. The calves are being reared on the farm of Roger and Lorraine Woods near Ballyvaughan. Two weeks ago they were moved up to the winterage. They are doing well there as there is plenty of vegetation for them in the winterage. The three students visited all the primary schools in the area informing them about their project and getting the students involved in naming the calves. You can keep up to date on how the calves are progressing by visiting their website – www.burrenwinteragefarmers.eu

Following the SciFest@College 2018 STEM fairs, 37 projects were selected to contest the National Final of SciFest, which was held in the Marino Conference Centre in Dublin. Amy Woods from Ballyvaughan was one of the finalists with her project entitled “Expansion rates of Japanese knotweed (Fallopia japonica) in North Clare”. She was presented with an excellence in STEM award at the event. 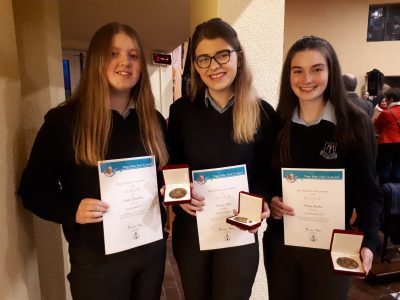 Transition year students took part in the ‘Angels’ fundraising campaign in conjunction with the Irish Wheelchair Association. This took place in Aldi Ennistymon on Thursday 8th and Friday 9th November 2018. Our students raised €1,262.38 and the students will take part in the IWA Wheelchair Basketball Competition in 2019. 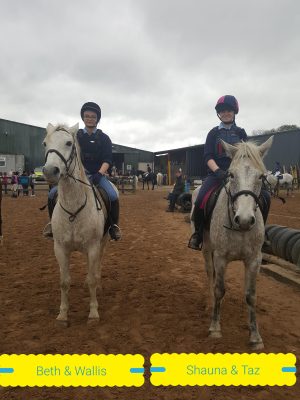