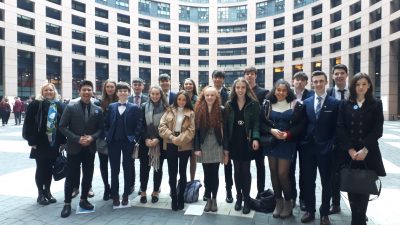 Since becoming an Ambassador School for the European Parliament in May 2017 the European Studies Class in Mercy Mounthawk have been busier than ever. They work tirelessly during the year on numerous projects and they also take part in many events in an attempt to enhance their skills as diplomats and negotiators. As a result of winning a video competition run by the European Parliament Office in Dublin they were given the opportunity to represent Ireland at a Euroscola event in the European Parliament in Strasbourg on February 15th .  14 transition year students and 4 fifth year students attended the parliament and got to experience what it is like to be an MEP for the day. Keela Hughes and Labhras Long introduced Mounthawk to the other delegates in Spanish. After a very long day 12 students out of the 580 in attendance took to the top of the hemisphere to defend their resolutions. Three of these students were from Mounthawk; John McCrohan, Matthew Dineen and Isobel Keane. As the evening reached a conclusion the majority of the class had taken an opportunity to voice their opinions on the issues that were important to them. It was the trip of a lifetime and the class are very grateful to the European Parliament Office in Dublin for  such a fantastic prize.