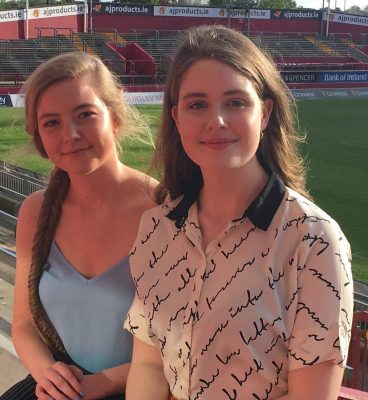 Gaisce or ‘great achievement’ is a self-development programme for young people between the ages of 15-25 and has been in existence since 1985. The programme believes in the ability and resilience of young people and nurtures that ability to help them realise their full potential. The programme has four aspects: Community , Physical, Personal skill and Action Adventure. (From the gaisce website)

Dakotah Carter – O’Flynn and Laura Egan began their Gaisce journey during Transition Year in Mercy Mounthawk with the Bronze Gaisce award which they received in 2017. At the start of Sixth Year, they decided to continue to progress towards obtaining the Silver Award. This award symbolises dedication, hard work, and growth. It involves a 26 week period of each of the following: volunteering in the community, developing a new skill and partaking in physical activity. Their experience involved volunteering with Irish girl guides where, as senior Branch members they mentored the Junior guides. They also undertook a 26 week programme of video editing where they made 26 short films on topics such as DIY, cooking and how to succeed in secondary school. They learned skills such as applying effective transitioning, lighting, audio and camera angles. The third component of the programme involved a 26 week physical endeavour activity comprising swimming and soccer. The last element of the Silver Gaisce award is an adventure hike in which participants spend two days and three nights pushing their boundaries to successfully plan to carry out and complete the adventure journey. As the famous quote suggests “the best-laid plans of mice and men go awry”, for them this was no exception. Their hike on the Dingle way involved enduring storm Hannah, foraging for food and vlogging for their Gaisce Youtube channel. Dakotah and Laura utilised their video editing skills, developed over 26 weeks, to make a documentary of their three day adventure journey.  However it was all worth it, as on Tuesday night, 30th April in Thomond Park,they, as two out of the five awardees in Kerry this year, received their Silver Gaisce medals. Mr. Shane Kissane, the Deputy Principal of Mercy Mounthawk acted as their PAL (President’s Award Leader) for both awards and will continue to do so as they strive for the Gold award in 2021.