Merry Christmas from all at Our Lady’s Castleblayney 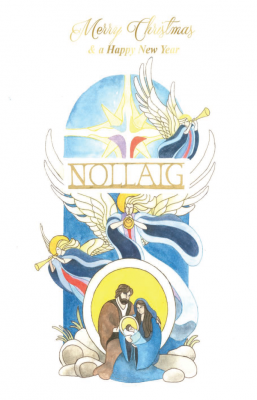 Our Lady’s Castleblayney would like to take this opportunity to wish you a very Merry Christmas and a peaceful New Year.  May it be filled with peace, happiness and God’s blessing.

In lieu of the postage fee a charitable donation has been made to CAS (Cycle Against Suicide).

This years image for our school Christmas card was designed by Transition Year student Katie Cumiskey.

Another Scholarship for Our Lady’s 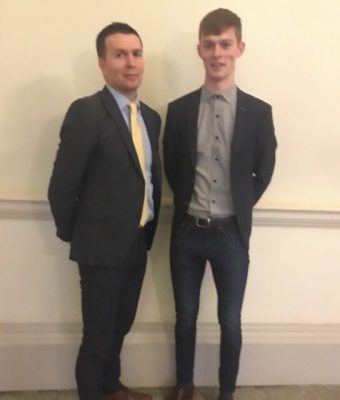 Congratulations to Ciaran McKearney who recently was the recipient of an Entrance Scholarship to Trinity College Dublin. These scholarships are awarded to the highest performing student from a school who is attending Trinity College provide they achieve over 500 points. Ciaran achieved 625 points in the Leaving Certificate and is studying Economics, Business and Social Studies.

This latest scholarship success brings the total number of Entrance scholarships for the academic year 2018-2019 to three, an excellent number in one year and one which Our Lady’s is justifiably proud of.

First to the podium were Aimee Moore and Ethan O’Gorman who are both studying Business and Law from the Leaving Cert class of 2019 who were honoured at a ceremony last month in UCD. Ciaran’s great achievement rounded off a memorable month in Our Lady’s. Speaking at the school during the week, Principal, Mr Eddie Kelly offered his congratulations to all the students who had been awarded scholarships. “These young people have not achieved such fantastic success without a lot of hard work and effort and indeed have reaped the rewards of their efforts, they are a credit to themselves and their families and we in Our Lady’s are very proud of their achievements. They are wonderful ambassadors for the school and they epitomise all that is good in Our Lady’s, striving to do their best, to make the most of their talents while remaining true to their core values of honesty, integrity and fair play.  All of the staff join me in wishing them well in their future endeavours, as we do to all the class of 2019 in their chosen career paths and courses. Of course none of this could happen without the hard work of a very committed and dedicated staff and on behalf of the students I would like to acknowledge their unfaltering commitment and interest in the well being of their students.”

Congratulations to all concerned. 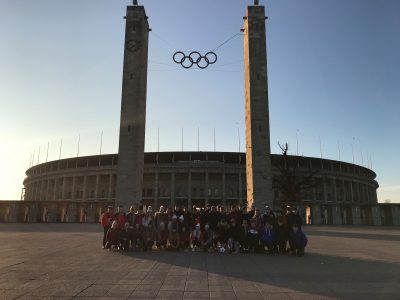 Pictured at the famed Olympiastadion in Berlin are Senior History & German students from Our Lady’s Castleblayney, who accompanied by 5 of their teachers enjoyed an action packed tour to the historical city of Berlin where their Leaving Cert History course was brought to life and their German oral skills were put to the test!

Early last Wednesday morning a group of forty four senior History and German students from Our Lady’s Secondary School, accompanied by their History teachers, Mr. O’Boyle & Ms. Sheridan, Mr. Lyons, Mr. Gonoud, Ms. Sweeney and Principal Mr. Kelly, set off to the historical German city of Berlin. The trip gave the students a wonderful opportunity of bringing their Leaving Certificate History syllabus to life as well as honing in their German skills for the upcoming Leaving Certificate Oral exam. After arriving on Wednesday morning the students took part in a guided walking and bus tour of Berlin, taking in the political, economic and social history of the city including features such as the Brandenburg Gate, Holocaust Memorial, Berlin Wall and a visit to the former site of Hitler’s bunker. Next up, the students had the opportunity to get into the festive spirit with a visit to the world renowned Berlin Christmas markets at Potsdamer Platz as well as relaxing with some ice skating in the outdoor skating arenas.

This was followed on Thursday with an eagerly anticipated visit to Sachsenhausen Concentration Camp which was used by Hitler and the Nazi’s during World War 2. The students were treated to an excellent tour of the camp and its role during World War 2. Next up was a visit to the Olympic Stadium, site of the famous 1936 Olympic Games where the great Jesse Owens won four gold medals. The students marveled at the magnificent architecture and history of this famous stadium. Later that evening, the students had the opportunity to visit the German Parliament headquarters at the Reichstag and take in some of the spectacular views of the city from the buildings iconic roof terrace and glass dome.

Friday began with a tram out to our last guided tour of the trip with a visit to the Stasi Prison. This was used for holding political prisoners during the Cold War period. From there it was onto the famous Checkpoint Charlie museum and was followed by a visit to the former headquarters of the SS located at the Topography of Terror.

Before flying out on Saturday evening students were given one last chance to visit the Christmas Markets and the famous Berlin Mall. The group arrived home safely to Castleblayney with many interesting facts and additional knowledge that can be put to good use in the months ahead as well as many treasured memories that will last a lifetime.