Presentation Castleisland completed a remarkable 3 in a row of National League Basketball titles (the threepeat!) recently when the beat Scoil Chriost Ri Portlaoise 48-41 in the under 16 A final in the National Arena. Over a 3 year period this group of girls played 33 games losing only one league game in that time. The team reached and won 3 national league finals in 2015, 2016 and 2017. This was the 21st All-Ireland title won by the school under school coach John Enright and ranks Pres Castleisland as one of the most, if not the most successful school in Irish Schools Basketball history. The success continues as at time of writing the current under 16 team have won the South West title and the under 14 team have qualified for the national semi-finals in February. The team will be presented with their award at the Kerry Sport Stars Awards at the INEC, Killarney on Friday, February 2nd. 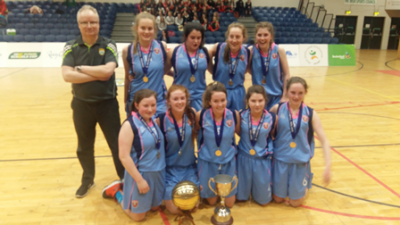