This year is a particularly significant year Presentation schools as we celebrate 300 years since the birth of our foundress, Nano Nagle.

On Monday 22nd October we hosted the inaugural Nano Nagle Tercentenary Public Speaking Competition with 9 students participating from three Presentation schools- Kilkenny, Wexford and Waterford. This was a wonderful opportunity for our Pres girls to get to know other Pres girls and it was lovely to have Presentation nuns Sr. Bríd and Sr. Josephine in attendance, along with Marie Griffin, CEO of our governing body CEIST.

Past -pupils Liz Reddy, Head of News at WLR, and Sinéad Dunphy, Director of Cork Jazz Festival, along with local poet Frank Farrelly from Mount Sion had the difficult job of adjudicating the competition, and Sr. Concepta O’ Brien from the Presentation Sisters leadership team was the chairperson.

The speeches addressed a range of topics related to Nano Nagle, her vision and the empowerment of women. All of the speeches were delivered with excellence and the standard was very high so we were particularly proud when our own student Caoimhe Halligan was announced as the winner. Congratulations to Caoimhe who delivered a very convincing and passionate speech based Hilary Clinton’s quote that ‘Equality for women remains the great unfinished business of the 20th century’. Congratulations also to runner-up Katie Cunningham from Presentation Secondary, Wexford. Both girls received beautiful glass pieces from the Irish Handmade Glass Company as their prizes. 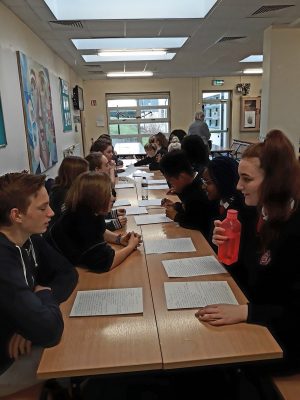 We also hosted a visit by a group of students and their teachers from our twin town, St Herblain at the beginning of December and some of our girls had great fun accompanying them around the cultural sights of the city as well as teaching them how to dance ‘Ionsaí na hÍnse’. It was also very interesting for us to get an insight into life in school in France.

The SVP group worked as hard as Santa’s elves in December, encouraging their fellow students to dig deep into their pockets so that they could buy hats, scarves, and toiletries to donate to the men’s hostel, along with toys that would bring a smile to the faces of less well-off children at Christmas. The staff were also inspired to support the WLR ‘Red to Work’ initiative and were visible all around the school in various, though in some cases dubious, shades of red on Friday 14th December.

We were thrilled to be selected as just one of 20 secondary schools across the country to participate in the trials of the Global Schools Programme. As part of the roll-out of this Department of Foreign Affairs and Trade initiative, that took place on 9th January, we were delighted to host Ambassador Dan Mulhall, Irish Ambassador to the USA, Ciara Leacy, DFAT and Commandant Tom Boucher, Óglaigh na hÉireann to explain to us the important role Ireland is playing in this ever changing world. 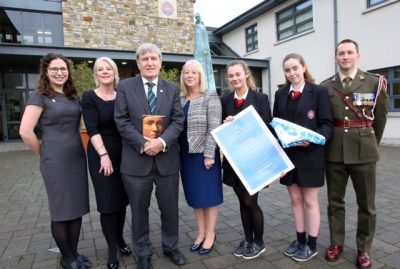 Ciara, who was the first of the guests to speak, gave a great insight into the variety of work that goes on in Irish embassies around the world and outlined the ambition of our government to double Ireland’s global impact by 2025.
We gained a deeper understanding of this work through an engaging speech by the Ambassador who outlined for us all the significance of the UN. He spoke passionately about the importance of playing our part in making the world a better place. He explained that we all have a role to play in this for the benefit of the global community, but also because Ireland benefits when the world is peaceful and prosperous.
He recounted, with great charisma, his different and sometimes challenging assignments around the world. He also spoke about how Ireland, as a country, and our view of the world has transformed.
He urged the students of the Pres, as the upcoming generation, to take up the mantle and take on the challenges that face us such as Climate Change, Conflict, and the Growth of the World Population.

It was finally the turn of Commandant Tom Boucher to take his place at the podium, to demonstrate the hugely important work of the Irish defence forces and the missions that they have been involved in down through the years.
It was with great pride that we learned about the 60 years of unbroken peacekeeping service that Ireland has given to the UN, and how we are the only country in the world to hold this record.

Following a lively Q&A session, during which the ambassador answered questions on a number of topics that ranged from political neutrality to the plight of the undocumented Irish people in America, the school was presented with the UN flag and charter.

The ambassador did not leave Coláiste na Maighdine empty-handed either, and was delighted to be presented with the book about the foundress of the Presentation order entitled ‘The Legacy of Nano Nagle’ by the Head Girl and Deputy Head Girl of the school. 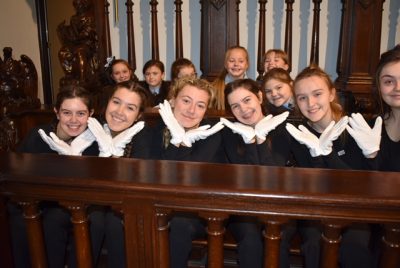 Students involved in the mime at the tercentenary mass

The sweet voices of students from the Presentation Primary and Secondary school echoed through the cathedral on Wednesday 21st November, as both schools came together for a special mass, with teachers, retired teachers, parents and friends, on the tercentenary of Nano Nagle’s birth. The choir mesmerised the congregation with a medley of hymns and songs from the musical ‘Woman of Welcoming Heart’, written in honour of the foundress of the Presentation sisters.

This memorable occasion was a most beautiful collaboration as both schools came together to express their thanks to the Presentation sisters through mime, prayers, reflections and readings.

It was a great honour to have Bishop Cullinan with us to concelebrate the mass with Canon Edmond Cullinan and we were delighted to have Sr. De Lourdes representing the Presentation community as she said the final prayer.