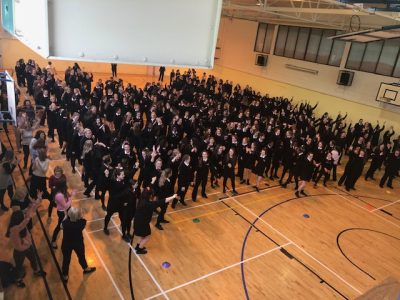 Staff and Students Dancing for Cancer in the School Gym

The return to school after the Easter holidays is never easy but this year we had a spring in our step when the school community came together to break out our dance moves as we got behind the Today FM ‘ Be A Dancer for  Cancer’ campaign in aid of the Irish Cancer Society.

The atmosphere was electric as delighted staff and students came to the school gym during the last class of Tuesday 30th April to dance with energy and enthusiasm to The Moon’s Shut Up and Dance, wonderfully choreographed for us by Trish Murphy.

The excitement continued long after the event as the school Twitter account went into overdrive as the dance was posted and viewed more than seven thousand times that evening and the following day!

We were all very proud to learn that we managed to raise €1060 for this worthy cause. 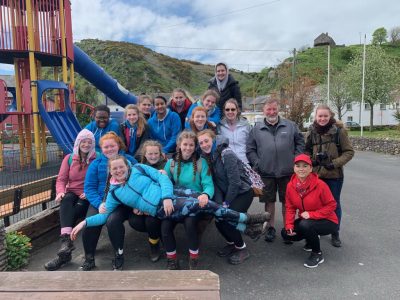 Energetic Transition Year students and staff on their Gaisce walk

At the start of the year, all students in Transition year were given the opportunity to take on the challenge to participate in the President’s Award, known as Gaisce. Each participating student challenged herself in the areas of Community Involvement, taking on a new Personal Skill and engaging in a Physical Activity in the hope of being awarded with the bronze Gaisce award.

The final hurdle in this challenge was the planning, preparation and undertaking of an Adventure Journey. This ‘adventure’ involved the girls lacing up their runners and setting out on an intimidating 25 kilometre walk over the course of two days, led by some energetic Transition Year teachers. The students were mesmerised as they meandered along the stunningly beautiful Waterford coastline, taking in the incredible views of their own county and the coastline of nearby Wexford. After a challenging first day of walking, there was just enough energy left to engage in a competitive game of football on Woodstown beach before settling down for the night at the hostel.

The atmosphere over the two days was one of support, unity and fun. Much of this fun happening at the park in Passage East, where sounds of laughter and glee echoed all around as the excited bunch descended on the swings and slides, with the enthusiasm of a bunch of pre-schoolers. It was with broad and bright smiles (and a few blisters too) that every single participant made it to the finish line in Cheekpoint to celebrate this amazing accomplishment with a well-deserved ice-cream. 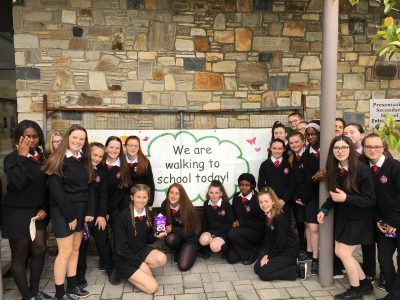 A large group of students braved the rain and walked to school last Wednesday as part of the launch of ‘Walk on Wednesday’, organised by our Green Schools Committee and Mr. Clancy. This initiative encourages as many people as possible to walk to school every Wednesday in a bid to become more active.  All participants in the walk received a raffle ticket to win environmentally friendly prizes such as re-usable water bottles and pencil-cases made from recycled materials. 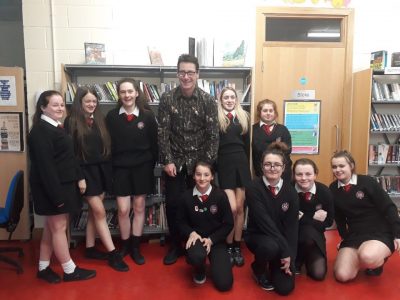 We were delighted to have the legendary Niall de Burca, Ireland’s finest Seanchaí in our school on Wednesday 1st May.  Niall, who has travelled the world as a storyteller had students and staff in the palm of his hand as he mesmerised us with a variety of tales during three workshops in the school library.

“An té a bhíonn siúlach, bíonn scéalach”, as the seanfhocail goes, and Niall certainly has a wealth of tales to tell!

The sound of beautiful hymns and musical instruments echoed through St. Paul’s church last Tuesday as we came together as a school community for the end of year mass, organised by the Religion and Music departments in our school. This lovely occasion, celebrated by Fr. Seán de Leis, was greatly enhanced by the students’ contribution to the music, prayers, readings, reflections and offertory procession.

Head girl, Joanna Meaney, addressed the entire school for the final time, imparting appropriate words of wisdom to each year group. Her fellow sixth years looked on with tears in their eyes as they realised that their time in the Pres was coming to an end.

At the end of the mass the outgoing sixth year prefects passed nightlights on to the fifth year prefects, to symbolise the passing on of the light in the tradition of our foundress, Nano Nagle, the ‘Lady of the Lantern’, who walked the dark streets of Cork carrying a lantern to light her way as she visited the poor, sick and elderly after her day’s teaching, back in 1754. These girls, who have come through a rigorous selection process, will be ambassadors for our school and will represent the school at public events.

As the prefects faced the congregation with their lights, everyone was delighted as Ms. Gallen announced the new Head girl, Quetsia Pamelo and Deputy Head Girl, Grace Malone. We wish them the best of luck as they take on their new roles.

Goodbye to our Sixth Years 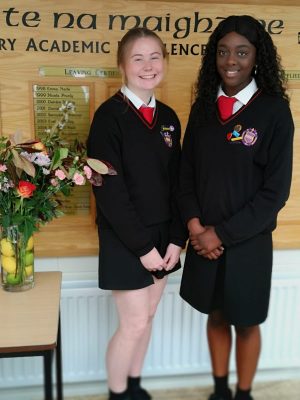 This week is a bittersweet one in that we officially say goodbye to the 6th year class of 2019.

In keeping with longstanding Pres tradition, the 5th years hosted a coffee morning for the group last Friday, giving the outgoing class a great send-off with a lavish spread of hot food, cakes and savoury treats. There were tears and laughter as the 6th years reminisced on their schooldays as we watched a slideshow of photos that captured the highlights of their journey through secondary school.

There were more tears on Monday as the official graduation ceremony and mass took place in the school. ‘Hopes and Dreams’ was the theme of this joyous and emotional occasion.

The girls recalled the highlights of their time here in Pres and paid tribute to those who helped them along the way, in particular Ms. Bolger, Ms. Gallen and their year head Ms. Mansfield.

At the end of the night, each graduate was called forward by Ms. Mansfield to officially sign out, marking the end of her time in Coláiste na Maighdine.

We wish all of our 6th year graduates the very best of luck in their upcoming exams and health and happiness in wherever their futures take them.