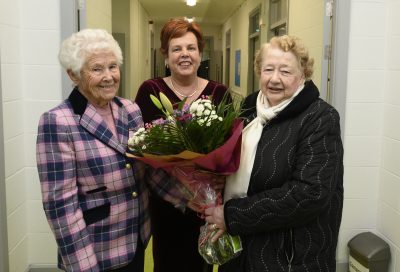 One hundred years ago, a group of Mercy sisters travelled from their convent in Tuam to Louisburgh Co Mayo and made the decision to set up a school. Mother M. Gertrude Chambers and Sr Columba Waldron arrived by side-car on October 7th 1919 and were followed on 1st November by Sister Michael Mannion and Sr Veronica Lynagh. The sisters set about making plans to open a secondary school and by late 1920 they held their first classes in the dining room of McDermott’s Hotel. By 1924 building had begun for a new convent and school. Both boys and girls were accepted, making this the first co-educational secondary school in Ireland.

The first intake comprised twenty pupils. This year, on November 15th, Sancta Maria saw the opening of a new school building to cater for its 500 strong enrolment. The official opening, performed by Minister for Rural and Community Development Michael Ring, was part of the centenary celebration of the Mercy sister’s arrival in Louisburgh. Minister Ring welcomed the Mercy sisters in attendance and acknowledged the Trojan work of Principal Pauline Moran in her part in bringing the plans for a new building to life.

Mrs Moran congratulated the Mercy order for their part in the school reaching this very significant milestone of becoming 100 years old.

“It is a testament to the years of dedication by the Mercy Order who had the vision to found a school in a small rural town”, she said. Mrs Moran said that students remain at the heart of the work of all staff in the school. Teaching and Learning are key to preparing students for life in the future. She said “We give them the skills to deal with 21st century Ireland. We believe in the wellbeing and holistic development of all”

Among the speakers on the day was historian Fr Kieran Waldron, who had taught in the school for seventeen years; former principal Sr Anne Feighney spoke about her time at the helm and Mr. Gerry McGuill who spoke on behalf of  CEIST.

Among the special guests was 99 year old Nora Hawkes, who attended the school in the early 30s and went on to own her own school in Askeaton, retiring at 74 and going on to volunteer as a teacher in Africa. Mrs Hawkes and another of our oldest former pupils, Mrs Brid Love, were presented with a bouquet from First Year students.

The Students Council presented a time capsule containing items which represent 2019 to them. Student Council Chairman Conor Clarke did an excellent job as Master of Ceremonies for the event while the school orchestra, in collaboration with Lousburgh School of Music,  performed Hall of Fame by The Script. The school choir, conducted by Ms Catherine Conway, performed the new school anthem which was specially written by the students themselves. The ceremony concluded with the blessing of the new building by Fr Mattie Long and the official opening by Minister Ring.

All pictures of the event below were provided by Michael McLaughlin.