Scoil Mhuire Carrick on Suir Past Pupil in the News 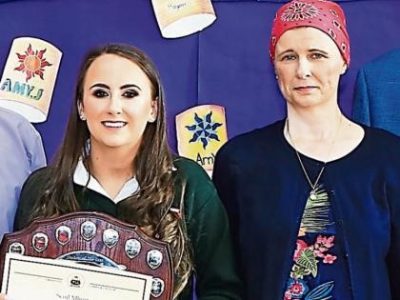 Rhona is pictured with her mother three weeks before her death as Rhona was being awarded overall student of the year last May.

Scoil Mhuire, Greenhill, Carrick on Suir are very proud of their former student Rhona Butler who spoke so eloquently on RTE Radio 1 with Ryan Tubridy  last Thursday (Jan 17th) and was featured on both the 6 o’clock and 9  o’clock news on Friday.

A spokesman for Minister for Education Joe McHugh said the Minister rang Ms Butler on Thursday after listening back to her radio interview.

“Minister McHugh firmly believes that reviewing how we look after and support students who suffer a close family bereavement at exam time is an important step,” he said.

“Minister McHugh has assured Ms Butler that the issue was immediately raised with officials.”

Tipperary student Rhona Butler lost her mother during State exams last year. She continued to sit her Leaving Cert in the days that followed her mother's death. The Minister for Education has now promised a review of how students who suffer bereavements during exams are treated | https://bit.ly/2FHWAhT