Sisters of the Christian Retreat: Fifty Years in Mountbellew

On Thursday, 11 August 2015, friends, teachers, past pupils and parishioners came together in St. Mary’s Church, Mountbellew, Co. Galway for a Mass to celebrate the arrival in the town of two Sisters of Christian Retreat on the 11 August, 1965 to prepare for the establishment of the co-ed Holy Rosary College.

The two, Sr. Dympna and Sr. Columba were united again, 50 years later, for the celebration which continued afterwards in the adjoining pastoral centre, where the contribution of all the Sisters who served in the school and community was honoured. 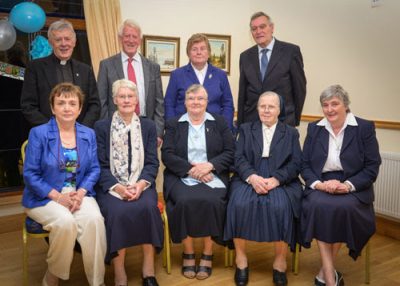 Pictured at the celebration were as follows: