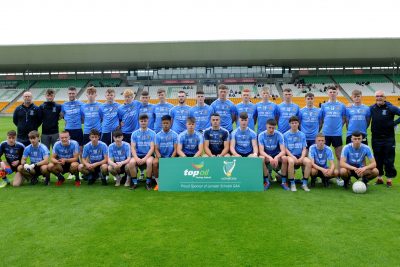 St Joseph’s Secondary School Rochfortbridge are celebrating their first ever Leinster senior A Schools football title after triumphing in their final 2-13 to 0-15 against Naas CB in Tullamore held on Friday July 17th.

The competition had been delayed since the semi-finals took place in early March and was the first major GAAA match since the return of action after the Covid-19 enforced lockdown.

Kildare side Naas CBS were chasing three-in-a-row and had contested last year’s Hogan Cup final but lost out by four points in today’s decider. With crowd restrictions in place at the Offaly venue due the current rules on outdoor gatherings, the game was streamed live by Leinster GAA.

St Joseph’s got off to a dream start with Devon Hill blasting home a superb strike in the opening minute to the Naas CBS net. The title holders rallied during the first half but still trailed St Joseph’s 1-5 to 0-6 at half-time.

Naas enjoyed a strong period in the third quarter to go ahead 0-13 to 1-9 by the 44th minute before St Joseph’s hit a string of crucial scores. Josh Gahan pointed to level the game, Brandon Kelly put them ahead before a 51st minute goal from a penalty by Kelly left them ahead 2-11 to 0-13.

The champions tried to rally with Mikey McGovern and James Dalton notching points for Naas to leave them two adrift but the loss of Alex Byrne when he was shown a red card was a major setback. They couldn’t draw any closer though with two points from Jack Torpey clinching the success for St Joseph’s Rochfortbridge. 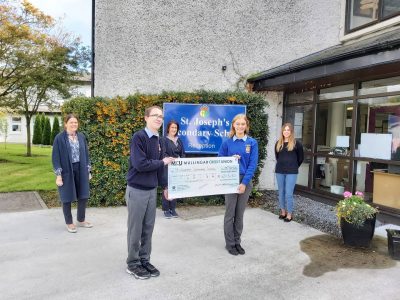 Pictured is Andrea Corroon from Mullingar Credit Union presenting a cheque to representatives from our Student Council; Emma Rogerson and Cormac O’Fearghail along with Eileen Alford (Principal) and Sarah Dolan (Student Voice Coordinator). Many thanks to Mullingar Credit Union for this generosity and well done to our Student Council for securing this funding. The money has been used for IT equipment and other resources for student use. Thank you to all involved! 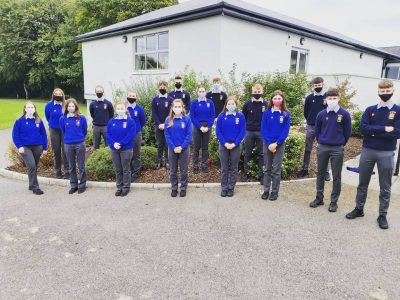 Our newly appointed Sixth Year Prefects 2020/21 have been very busy helping our new First Years to settle in. They have organised socially distanced ice-breakers, a tour of their area of the school and daily morning check-ins to see how they are doing. We wish our new prefects every success for the year ahead and thank them for their hard work so far.