The graduation ceremony for the Further Education students at Mary Immaculate Secondary School Lisdoonvarna was held in the school on Friday night last, November 29th. 90 students were the recipients of the school’s QQI level 5 programmes in Health Service Skills, Early Childhood Care and Education, Tourism with Business and Construction Technology and level 6 programmes in Health Services Supervisory Management, Early Childhood Care and Education and Tourism with Business. Among those graduating was a number of asylum seekers from the Thomond Hotel direct provision centre.

The students and their family members were welcomed by Principal, Mona Hynes who highlighted the school’s long and well-established tradition in Further Ed, pointing out that this was the 22nd annual such graduation ceremony. She referred to the value of lifelong education for personal development, educational accreditation, pursuing higher education at 3rd level and indeed employment opportunities. “This opportunity, coupled with the foundations of your rich tapestry of life experience, is magic and enriches all”, she told the students.

Three students outlined their experiences of further education at Mary Immaculate. Ken Dwyer, recipient of a level 6 award in Health Services Management Skills, spoke of the welcoming and helpful atmosphere in the school and of the value he received from his award. Ken is now working in the Health services area.

Audrey Chifungo, who moved to Lisdoonvarna as an asylum seeker, outlined the difficulty of settling in to a new place, away from family and friends. She commented on the fact that the community of Lisdoonvarna was welcoming to the asylum seekers, adding “Let’s strive to build each other in a community learning to come to terms with new blood, new cultures and different ways in which we do things.” She stated that the children were happy in Lisdoonvarna and that “ it is a lovely part of the world to find yourself again”

A third speaker, Kinga Versenyi, thanked the school for the opportunities it provides in a local setting for so many students, adding that she is now studying for a BA in Early Childhood Care and Education at Mary Immaculate College in Limerick

Further Education Administrator, Teresa Conneely, congratulated the graduating students and welcomed Catherine O’Sullivan, Director of Further Education with the JMB and ACMSS who presented the awards. 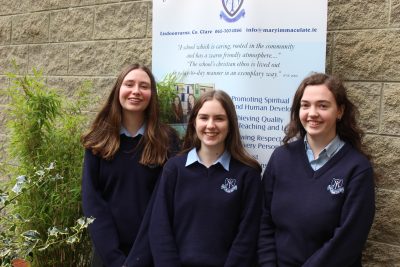 (Congratulations to our students Emma Haran, Aoife McNamara and Emma Vaughan who took part in the second round of the Gael Linn Irish debating competition on Tuesday, the 10th of December in Limerick. They have now made it to the All-Ireland Semi-final of the competition which will be held in March.

A number of students from the 2019 Leaving Cert class of Mary Immaculate Secondary School, Lisdoonvarna have received awards based on their Leaving Cert results. Well done to all of them.

Arthur Collins, Kilfenora, now studying at UCD, is the recipient of a UCD Entrance Scholars Award as an Academic High Achiever. These awards are presented to first year students who achieved 560 points or more in their LC examination.

Thomas Hartigan who is studying at Trinity College, Dublin, is an Entrance Exhibition Awards 2019 recipient, as a result of high performance in his LC examination.

Ciara Costello, studying at Mary Immaculate College, Limerick is being awarded an Entrance Scholarship from the college. 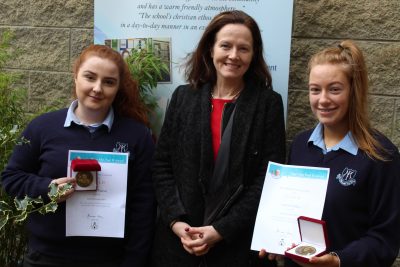 Congratulations to Eve Mc Mahon and Laura Griffey, both fifth year students, on receiving a Gold Medal John Paul II Award for their volunteerism and sharing of talents, both in school and church communities. Through doing so in a generous and committed way, both students demonstrate true Christian Leadership, modelling our school ethos in a strong and real way. Mary Immaculate school community are very proud of their achievement and extend our congratulations also to their families and parish community of Kilfenora.

Success for Lisdoonvarna students at BTYSTE 2020

There was success for a number of students from Mary Immaculate Secondary School Lisdoonvarna who took part in the BT Young Scientist and Technology exhibition which was held at the RDS Dublin in January. The school was represented by six projects. The school was delighted with the success of the students.

Sarah McNamara with a project entitled “Using Earthworms as an Indicator of Soil Health in North Clare” was awarded third place in the senior individual Biological and Ecological category. Her project looked at the health of the soil on farms throughout the Burren using earthworms as a soil health indicator.

Dylan Egan was awarded Highly Commended for his project entitled “Teachers and Technology: Breaking Down the Barriers”. His project was in the senior individual Social and Behavioural category. His project was an Investigation into the main factors preventing post-primary teachers from integrating Information and Communications Technology (ICT) into their routine in the classroom.

Alice Davoren and Emily Cullinan were awarded a Highly Commended in the junior group Biological and Ecological category for their project entitled “The Grey Area within Greywater”. In this project they looked at the effect greywater has on the level of nutrients in the soil, on plant growth and earthworm population.

The other three projects that represented the school were:

Jack Rush and Matthew Irwin with their project entitled “The heads up on headphones, are they damaging teenagers hearing?” In the project, they looked at whether the type of headphones and earbuds used by teenagers to listen of music with affects the risk to their hearing. The advice they would give is that at higher volumes all types of earphone can damage your hearing, so turn down the volume.

Shauna O’Kane had a busy time on her stand talking to the public. She was featured in a number of newspapers. Her project got great attention from visitors to the exhibition. The title of her project was “Bits or bitless, that is the question?” In the project she looked at whether horses display discomfort when using a bit as against using a hackamore and if their performance is affected by it.

Cindy O’Leary had a project entitled “Is there more in your mackerel than meets the eye?”

A former participant from Mary Immaculate Secondary School, Dr. Patricia Cusack visited this years projects. It was 14 years ago she successfully represented the school at the young scientist competition.

The students were great ambassadors for our school. They were treated to lunch at school for representing the school so well.

First year students visited the exhibition on the Friday of the exhibition. Some of them are already planning projects for next year’s event. The projects were mentored by John Sims. This was the 31st year he attended the exhibition with projects. The management and staff thanked him for his hard work and dedication to helping students participate in this event every year (and they had some cake for him!).

A carol service was held on the last day of term in Corpus Christi Church, Lisdoonvarna by the students and staff of Mary Immaculate Secondary School. This has become an annual event which is looked forward to by both staff and students. As well as staff and students it is attended by many parents and parishioners from Lisdoonvarna. We wish to tank Lisa O’Doherty, Lauren Dunne and Shane Slattery for their work in preparing for this event.

Having won the five calves almost two years ago, this adventure is coming to an end. The cattle were slaughtered in November. The students were very happy with how they killed out. They submitted their project report in December and had a final interview in early January. The overall winner from the six schools will be announced in Croke Park on the 4th march 2020.

Any profits made from rearing the cattle were divided among the three students involved. Our thanks to Amy Woods parents, Rodger and Lorraine for taking such good care of the cattle for 15 months. The were reared outside the whole time. During the winter months they stayed on the winterage. This type of farming is traditional in the Burren where cattle are moved to upland pastures from November to April. By doing this, farmers are working in tandem with nature by helping to control grass growth. If this was not controlled many species of plant common in the Burren would not survive. The cattle can also stem the encroachment of the hazel.

We wish the three students the best in the finals and in their upcoming Leaving Certificate. 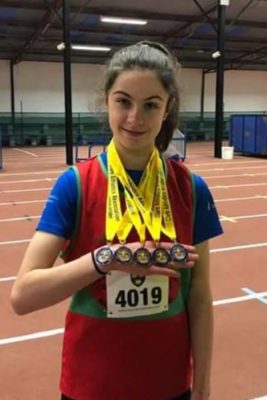 A huge Congratulations to First Year Caoimhe Byrne O’Connell on her victories in Nenagh at the weekend in the Clare county indoor championships. Caoimhe won 60m hurdles with a PB, also won High Jump, she also won the Long Jump with a PB of 4m40cm. The school has only learned this evening also that Caoimhe’s achievements are a Clare championship record.

Caoimhe also got Silver in 800m and silver in 60m sprint. She is extremely modest and not one to broadcast her success but we here, in Mary Immaculate are extremely proud of Caoimhe and delighted to share this positive news. We acknowledge she has worked so hard for this success, attending training in Nenagh 1 to 2 times per week. Congratulations also to Caoimhe’s parents and family as without their love and support it would not be possible. We wish Caoimhe well in her continued training schedule in Nenagh in preparation for the upcoming Munster championships at the end of the month.

Caoimhe will also represent the school tomorrow at the North Munster Athletics in Limerick. We wish her and the rest of the students representing the school the best of luck at this event. Best of Luck to All.