On May 2nd the ‘Complete Camán’ group travelled to Croke Park in the early hours of the morning on what turned out to be a 19 hour return trip but by God was it worth every second. The girls were competing against 22 other county champions so the standard was exceptional. At 3.30 pm the ‘Complete Camán’ was chosen as the Overall Winner of the Junior Category 2018 and not only this they also receive an award from Patents Office of Ireland for the Best Awareness of Intellectual Property in the Junior Category. The girls received their IP award for their research into a Patent for their hurley which is ready to be filled and also their research into Trademark protection with regard to their name and logo. This was fantastic achievement to complete in top 1% of student entrepreneurs in the country and to scoop two national titles was exceptional. Some 23,600 student participants from 480 secondary schools around the country take part in the finals annually, which kick-off every September. This year’s programme had a total of 230 teenage entrepreneurs, aged between 13 and 18, from 77 different enterprises, competing in the final, with every local authority area represented. 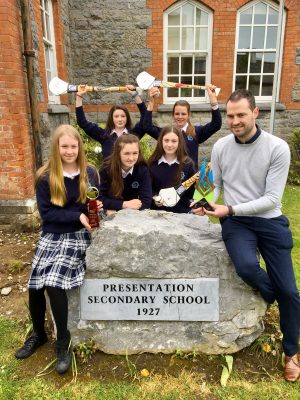