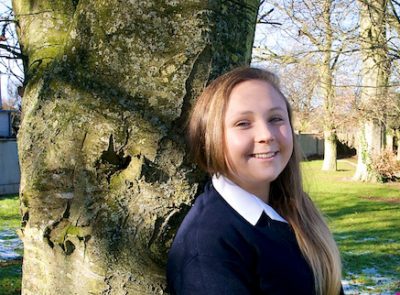 Sarah O’Neill from Bansha, Co. Tipperary has been recognised for the motivation, service and impact she has demonstrated for her local community as a 2015 Pramerica Spirit of Community Awards top 20 finalist.

Sarah who is a third year student at St. Anne’s Secondary, Co. Tipperary, has been involved in volunteering throughout primary and secondary school. She was a founding member of her primary school’s Green Schools Committee, and has continued to be a part of this initiative in secondary school, currently in the role of Junior Secretary.

Sarah was also a member of her local Tidy Towns Committee when in primary school.

However, Sarah’s most notable voluntary achievement was when, in 2011 at the age of 11, she became the youngest girl to reach the summit of Mount Kilimanjaro. With her group, Sarah raised €16,000 for the mental health charity ‘Aware’, one which is close to her heart.

Sarah has not been without hardship, however. Mountaineer, Ian Cheever, who was part of the team to climb Kilimanjaro, and Sarah’s inspiration to participate in the expedition, tragically passed away after the venture was completed. Sarah used Ian’s death as an incentive to further her fundraising, and in June 2014, together with other members of the Kilimanjaro team, raised €900 to build an orphanage in Tanzania in his memory.

Helen Ryan, one of Sarah’s teachers says, “Sarah’s meeting with mountaineer Ian McKeever and her subsequent climbing of Kilimanjaro has been such a true inspiration for her that I truly believe that her commitment to volunteering will be strong throughout her life.” This is supported by Sarah herself who contends, “After seeing the poverty first hand I now realise how essential it is for voluntary groups to keep raising funds for projects.”
The only all-Ireland youth initiative of its kind is run in partnership with The National Association of Principals and Deputy Principals (NAPD) and The General Teaching Council for Northern Ireland (GTCNI) and recognises outstanding acts of volunteerism by Ireland’s youth.

Twenty post-primary students, who hail from all corners of f Ireland, will be presented with €500 and an engraved silver medallion at the gala awards ceremony on 12th March in the Slieve Donard Resort & Spa by special guest Brent Pope. At the gala, two of the 20 students will be named All-Ireland Youth Volunteers of the Year and will receive €1,000 for a charity of their choice, a gold medallion, a crystal trophy for their school and an all-expense paid trip to the United States in May to participate in the Prudential Spirit of Community Awards ceremony.

“The calibre of entrants was exceptional this year and we’re delighted to recognise and showcase such exemplary young people,” said Andrea McBride, vice president, Pramerica. “Since we launched the programme in 2006, the awards have given us the opportunity to acknowledge the voluntary activities of hundreds of extraordinary youth ambassadors who are actively making a difference in their communities. They are the future leaders in our society and they are a benchmark for other young people to strive towards. We are thrilled to honour their commitment to volunteerism through this awards programme.”