On the 7th of February 19 of St. Brigids Killarney TY students took part in a wheelchair basket ball tournament held in Neptune Stadium Cork. The girls made it to the final beating Boherbue comprehensive school by 1 point and bringing home the regional trophy. The girls will be attending the all Ireland play off in Dublin on the 14th March.

On Thursday the 7th of February, students from TY and 5th Year visited the IWISH Conference in City Hall, Cork. The conference and interactive exhibition is an initiative which aims to inspire, encourage and motivate young female students to pursue careers in science, technology, engineering and maths. 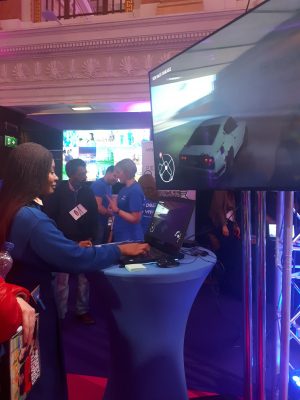 Congratulations to Ciara Kennelly from St. Brigids who has achieved the qualifying standard for the European Youth Olympics after her fantastic jump of 1.75 at the Munster Junior High Jump Championships in Nenagh last Sunday, and in the process added another Munster record to her ever increasing list of achievements. Ciara has also been carded by Athletics Ireland which is a huge achievement for such a young and talented athlete.

Transition year students from St.Brigids Secondary School Killarney travelled to Knock on the 11th of February.

When we arrived in Knock we started the tour at the Celtic Cross built for the visit of Pope John Paul II  between the Basilica and the Apparition Chapel.

We were then taken to see the two gifts from the visits of Pope John Paul II and Pope Francis, A Golden Rose and a set of rosary beads and a candle respectively.

We then came to the front of the Apparition Chapel where the girls got a brief history of the event that took place there. 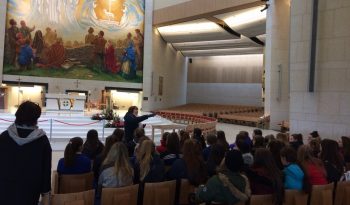 Knock shrine has a very unique story in the sense that it’s the only shrine in the world where the Lamb of God has appeared. As well as being a Marian shrine, it is a Eucharistic shrine.

The girls took turns at silent prayer while their hands touched the actual stone taken from the original gable where the apparition took place. This had to be removed for two reasons. Firstly because pilgrims were always trying to bring a little piece of stone or pebble from the wall as a relic or souvenir.  Secondly a special chapel was built around the Statues showing how that apparition was seen by the witnesses and the gable wall was covered to protect it.

The girls entered this chapel and respectfully knelt in silent prayer to remember all those who requested prayers from home.

We were then taken to the Our Lady Queen of Ireland Basilica where they lit candles and wrote petitions. 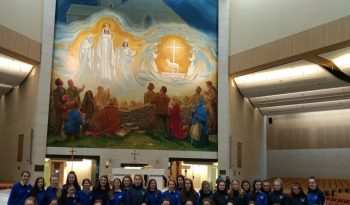 It is a beautiful and peaceful sacred space. The new award-winning interior radiates a warm and welcoming atmosphere. The symbolism of the architecture and beautiful art within was explained. It was amazing to realise that all counties and provenances of Ireland are somehow incorporated into the architecture. The highlight was a beautiful Venetian glass smalti mosaic of approximately 1.5 million individual pieces depicting the event  and is high above the back of the Altar. It was made near Venice , Italy. It is 14 square meters, one of the biggest in Europe! You are drawn into the event of the Apparition and into the minds of those who witnessed it.

A younger child from an earlier tour had exclaimed what a massive jigsaw it must have been!

We were then taken to the Museum where the girls could read the testimonials of the witnesses, see what life was like in Ireland at that time  and even read testimonials of people who have written of their own experiences up to present times.

Following this they visited the chapel of reconciliation and participated in Adoration of the Blessed Sacrament with other pilgrims for a few moments.

All of this took a little over two hours. They were then free to go and fill their holy water bottles to bring home to parents and grandparents and even browse through souvenir shops or avail of a light refreshment before departing for home.

Most of the girls had not been to Knock before and were really happy to make the long journey there and to witness the beauty of our own Marian shrine and become aware of its message of hope.

Laura Looney, Naoise O’Shea and Ciara Moynihan, Transition year students from St Brigids Secondary in Killarney and members of the green schools committee were invited to make a presentation to KOWTE (Killarney Organisation of Women in Training and Education) on the work completed by Transition year students as part of the green schools initiative. They spoke infront of over 50 members of KOWTE on the banning of single use plastic bottles from their school and their plans to focus on transportation initiatives to school next semester. The girls were both knowledgeable and confident and were received with a round of applause at the end of their informative talk.

God has no Country 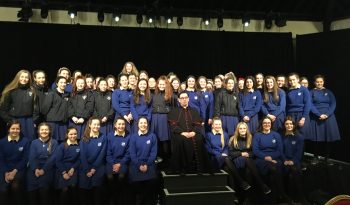 TY students from St. Brigid’s Killarney attended a performance of the acclaimed drama ‘God Has No Country’ in the INEC on February 13th. This one man play recounts the heroic deeds of Killarney’s Monsignor Hugh O’ Flaherty in the Vatican during World War II. The show was followed by an informative question and answer session with the actor and director Donie Courtney. It was an extremely enjoyable and educational experience